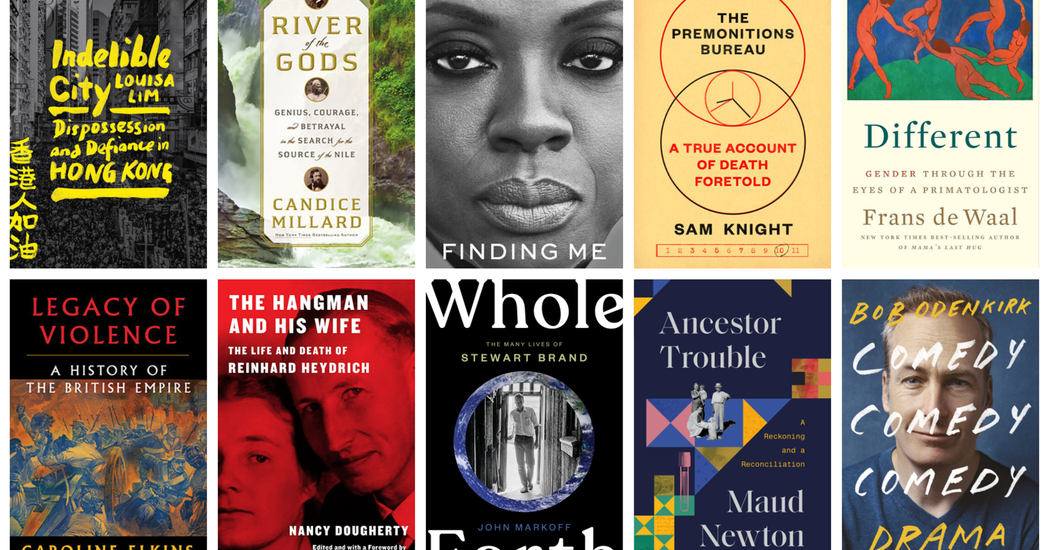 Odenkirk’s memoir might have also been titled “Obscurity Obscurity Obscurity Fame.” He was a cult favorite of comedy fans in the late 1990s for his work on the sketch-comedy series “Mr. Show,” but his supporting role in “Breaking Bad” and his starring turn in the show’s prequel, “Better Call Saul,” made him a household name. His memoir charts his dogged and unlikely path from Chicago comedy clubs to leading man.

Brand might be best known for his countercultural magazine Whole Earth Catalog, which first published in 1968. In that same decade, Brand was a participant in the exploits of Ken Kesey’s Merry Pranksters. Now 83, he went on to a long and varied life of thought and activism in the realms of environmentalism, Native American rights and personal computing. Markoff, a former technology reporter for The New York Times, wraps his arms around the whole story in this new biography.

In her first book, Newton, a critic and essayist, digs deep into her family’s past, from Depression-era Texas to witch-hunting Massachusetts, not flinching at what she sees. Closer to the present day, she wrestles with her father’s racism and her family’s religious extremism. Rooted in the personal, Newton’s book opens out to an examination of a culture besotted with Ancestry.com and 23andme.com, and asks what we’re really looking for in the past.

The poet Keats died at 25 in 1821, and his short life and brilliant work have inspired a vast amount of literature. In her new book, Miller says that literature often overlooks how rowdy and subversive Keats really was. She wants to shine light on aspects of his life and work “that haven’t always made it into the popular imagination, which still tends to make him appear rather more ethereal than he actually was.”

Davis, a fixture on television and movie screens, the winner of an Oscar (for “Fences”) and an Emmy (for “How to Get Away With Murder”), found steady work and then stardom as an actor after growing up in incredibly difficult circumstances. In her memoir, she writes of the poverty and food insecurity her family suffered in Rhode Island when she was a child, and of how acting changed her life, leading to a college scholarship, Juilliard and the theater and Hollywood success that followed.

In 2013, at 50, Goetsch’s life started to collapse. Her success as a writer and public-school teacher masked a decades-long depression. In a blog for The American Scholar in 2015, Goetsch wrote about how she “longed daily to be a woman,” a longing she had suppressed since childhood. Her new memoir is about her own transition and the story of the trans community over the course of her lifetime.

Less than a month after the murder of George Floyd in 2020, Alexander published an essay in The New Yorker titled “The Trayvon Generation,” in which she wrote about the young people who had grown up in the past 25 years, repeatedly watching stories that “instructed them that anti-Black hatred and violence were never far.” Her worry for that generation, including for her own sons, was braided with a consideration of the “creative emergences” in Black communities. This book expands on that widely shared essay.

Amy Gajda, a law professor at Tulane, examines the history of privacy in America, from the concerns of the Founding Fathers to the concerns of those who carry an ever-larger trove of personal data around in our pockets every day. In recounting the long history of debates over privacy, Gajda differentiates between everyday citizens and the press, and explains the hazards of both too little privacy and too much privacy.

‘A Brief History of Equality,’ by Thomas Piketty. Translated by Steven Rendall

Piketty, an economist and the author of perhaps the most surprising best seller in recent memory (the 800-plus page “Capital in the Twenty-First Century”), here synthesizes his ideas about the persistence of economic inequality in a shorter form. But as the “equality” in the title suggests, he also emphasizes the ways in which progress has been made. “In the long term, the march toward equality is very clear,” he recently said. “I really want to insist on that.”

Floyd’s name and face traveled around the world soon after he was killed on May 25, 2020. This book by two Washington Post reporters — building upon a six-part series in The Post — fills in the life behind the tragedy. It traces the roots of Floyd’s family to slavery and sharecropping, recounts his segregated childhood education in Houston and draws the connections between his adult life and crises in American housing, criminal justice and policing.

“Empire was not just a few threads in Britain’s national cloth,” writes Elkins, a Pulitzer Prize-winning historian. “It was the fabric from which the modern British nation was made.” She explores how brutality was inextricably bound up in Britain’s colonial project — and was in fact a central part of its “civilizing” mission — focusing on a few historical episodes, including the Morant Bay Rebellion, the Irish War of Independence, the Second Boer War and others.

Heydrich, the powerful SS chief, was the principal architect of the Holocaust, nicknamed the “hangman of the Gestapo” and “the butcher of Prague.” Dougherty died in 2013, before she finished this book, so Christopher Lehmann-Haupt — a longtime literary critic for The Times — completed it. Lehmann-Haupt died in 2018.

In this wide-ranging survey, Kelly unearths the stories of the people — farm laborers, domestic workers, factory employees — behind some of the labor movement’s biggest successes.

In the 19th century, the British explorers Richard Burton and John Speke set out to trace the Nile River, a yearslong process that led Speke to what he eventually called Lake Victoria. But Millard shows that the men did not “discover” anything — local populations knew very well where the headwaters of the Nile were — and their journey was greatly helped along by Sidi Mubarak Bombay, an East African man who was sold into slavery and sent to India before finding his way back to the continent.

De Waal — whose sprightly, intelligent, utterly compelling studies of bonobos and chimpanzees have taken on such topics as empathy, grief and compassion — here turns to gender and sex. “Whereas it is true that gender goes beyond biology, it’s not created out of thin air,” he writes. “There is every reason, therefore, to see what we can learn about ourselves from comparisons with other primates.”

“The act of writing about Hong Kong has become an exercise in subtraction,” says Lim, a journalist and author who was raised there. She refers to her efforts to protect her sources, by removing identifying details that could endanger them, but the point has a bigger resonance in the story of a place whose history has often been overtaken by a colonial point of view. With this book, Lim set out to to put Hong Kongers at the center of the story, weaving together portraits of citizens with major historical moments — the British takeover in 1842, the transfer of sovereignty to China in 1997, the pro-democracy protests in recent years.

What are those foreboding visions that people sometimes have? Are they, in fact, real? This is the fascinating story of the psychiatrist John Barker, who invited fellow Britons to share their premonitions with him after becoming convinced that the 1966 Aberfan disaster — in which an avalanche of coal slurry buried a Wales school and other buildings — had been foretold by supernatural signs.