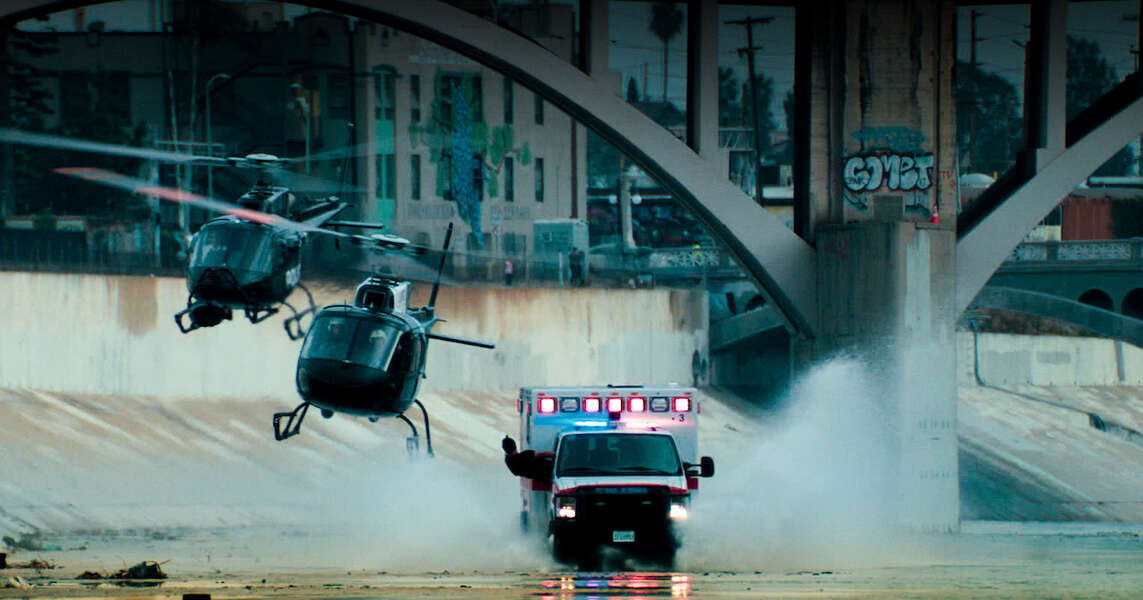 There’s a strange pastime in Los Angeles: The televised car chase. The new movie Ambulance is, for most of its running time, like watching one of those, except instead of being captured by local news helicopters hovering above, it’s directed by Michael Bay with all the flourishes you expect from the gonzo director including drone shots and explosions galore. That is to say, it’s captivating and a little bit nauseating.

In the marketing for Ambulance the letters L and A in the middle of the title are highlighted to reinforce that, yes, this takes place in Los Angeles. It’s unsubtle—but what did you expect from a Bay production? And, in fact, Ambulance is a very Los Angeles movie. Not just because of its references to Dodger Dogs—a great item of food—but because of its can’t-turn-away fascination with the high speed chase.

According to a New Yorker feature from 2006, the first televised pursuit aired in 1990 on KCOP. The tradition of cutting into broadcasts took off in the ‘90s after multiple stations showed California Highway Patrol tracking a murderer named Darryl Stroh who traversed freeways and city streets before being killed. Following the infamous chase of O.J. Simpson in his white Bronco in 1994, LA’s local pastime went national. These days the car chase has gone digital. Subscribe to local news providers KTLA on Facebook and you can find these kinds of grim spectacles streamed right to your phone. One source told New Yorker reporter Tad Friend that there’s a specific Angeleno appeal to this kind of diversion. “Here, everyone from old ladies to Catholic priests is waiting for the blood and guts, waiting to be appalled and mesmerized,” he said.

Why? Mary Melton wrote in Los Angeles in 2016: “L.A.’s obsession with car chases results from a confluence of factors: the LAPD’s aggressive pursuit policy (which is under review by the police commission), the city’s horizontality, an abundance of freeways, advances in camera technology, and a competitive TV news market that encourages imitation rather than innovation.” There’s a loneliness to Los Angeles that makes these moments alluring. When you live there, you spend hours in your car, often alone, obeying the rules of traffic. Watching a car chase is like watching someone say, “fuck all that.” It doesn’t matter who’s in the driver’s seat; It’s intoxicating rule breaking.

In Ambulance, two brothers, Danny and Will Sharp, played by Jake Gyllenhaal and Yayha Abdul-Mateen II, hijack an ambulance after a robbery gone awry. Danny is a live wire in a cashmere sweater who went into their father’s thieving business; Will joined the Marines to get away from it but now needs money to pay for his wife’s surgery. Inside the vehicle there’s a wounded LAPD officer and Cam, an EMT played by Eiza González. It’s a simple premise: Can they escape seemingly innumerable obstacles and get Will home to his wife and child? Whereas the chases that air on the local news take a bird’s eye view of the action; Bay pulls out all the tricks in his book to get the audience as close to the thrill as possible. His cameras refuse to stop moving as Will and Danny face off against helicopters and barrel through interchanges.

And yet, as a former Angeleno, I found myself watching Ambulance the way I sometimes have been glued to a tiny TV screen. In the back of my head I was charting Danny and Will’s path. The robbery starts in Downtown Los Angeles. They take back alleys for a while before eventually getting on the 110 freeway, which takes them South. From there they land on the 105, which takes them West, toward LAX, before a conflict at the 105 and 405 interchange, heading East. At some point they drive along the near empty Los Angeles river so Bay can film a scene where Gyllenhaal hangs out of the ambulance and shoots at a low flying copter. I am assuming that from the 405 they get back on the 10, which takes them to Boyle Heights where the journey, for the most part ends. The out-of-towner FBI agent makes a crack about how he’s never been that far East; meanwhile, his LAPD counterpart wears a USC shirt the entire time because he’s From LA.

The shout outs to various freeways will feel secondhand to anyone who has ever spent an extended amount of time in the city, even if to others it might sound like something out of the SNL sketch “The Californians.” And it’s that symphony of random numbers that make Ambulance just like any other car chase. Part of the reason you’re drawn in is because you want to figure out where they are going and how they are going to get there. It’s like a puzzle constructed out of LA’s infrastructure.

But, of course, you can’t watch a car chase without feeling that insidious creep of voyeurism. The pit of your gut knows that human lives are at stake, and yet you watch anyway. Jake Gyllenhaal, who wants his performance to be as big as Bay’s booms here, has explored this in Nightcrawler, Dan Gilroy’s 2014 thriller about Los Angeles local news’ bloodlust. Ambulance is not Nightcrawler.

Bay, as is typical for the man behind the Transformers franchise, is not one for nuance. He’s not asking the viewers to morally question why they can’t look away; He’s just trying to entrance them. But in that way it’s almost more accurate to the car chase-watching experience. It’s unequivocally entertainment, but that queasy feeling is not just because Bay’s camera makes you feel like you’re on a roller coaster. Just like real life, Bay relishes in treating humans like toys for our enjoyment.