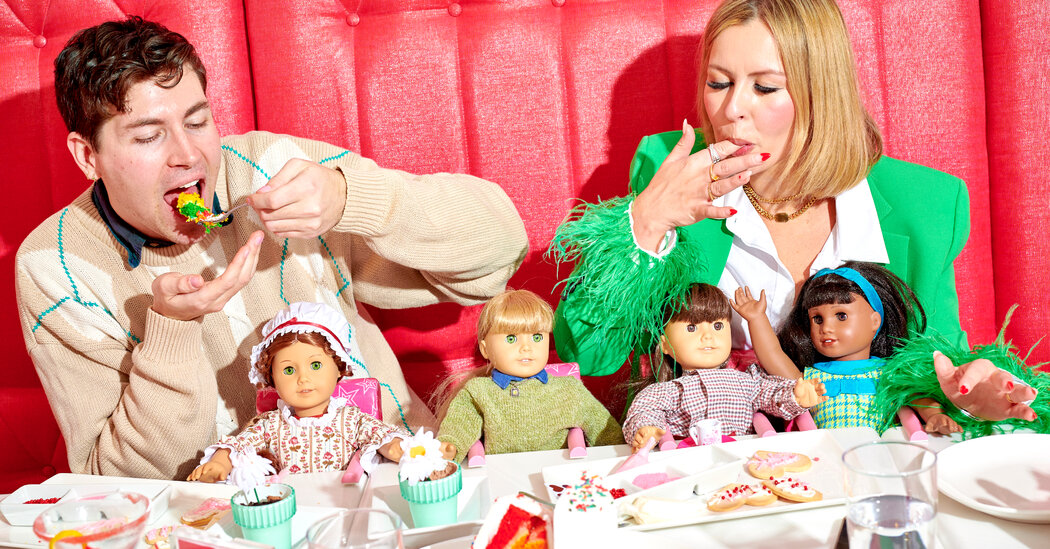 On a Monday morning in February, Harry Hill, 27, showed up at the American Girl Cafe wearing a vintage Christian Dior sweater and carrying a Coach tote that held two of his beloved dolls. He was joined by Serena Kerrigan, 27, who brought her dolls in a pink mesh Victoria’s Secret bag.

Mr. Hill, an influencer, is well documented as a fan: He has posed at a 7-Eleven dressed identically to one of his dolls on Instagram. He dressed as the Samantha doll for Halloween and created a series of memes made with American Girl dolls.

Ms. Kerrigan, also an influencer, was dressed by her stylist in “head-to-toe Zara” — a Kelly green skirt suit with feather cuffs. “I am the green M&M,” she said of her outfit. Like the previous iteration of the green M&M character, Ms. Kerrigan’s personal brand can be ribald.

The last time she and Mr. Hill came to American Girl Place, she made a TikTok video in which she got her Samantha doll checked for S.T.I.s at the store’s doll hospital.

The two were far from the first adults to show up — with dolls — to hang out there.

“Come with me to get absolutely obliterated at the American Girl Doll Cafe,” begins a TikTok video titled “American Girls grow into American Women,” uploaded by the comedian Sally Darr Griffin.

In the video, Ms. Griffin, 25, shouts out the labels she’s wearing — “Dress is Hill House, sunglasses are Coach” — then takes the first sip of what will be four mimosas, supplemented with a tiny nip of vodka that she smuggled into the American Girl Cafe at the Grove shopping mall in Los Angeles.

Ms. Griffin was joined by four other women in their 20s, each accompanied by a doll seated in a chair attached to the table.

“I was not obliterated,” Ms. Griffin clarified in a Zoom interview. “It’s just better to say that for the clicks.”

The clicks came. Ms. Griffin’s video amassed more than 600,000 views on TikTok, and a micro-trend of grown folks dining and drinking with dolls was born.

It’s not a wholly novel concept for adults to return to kid-centric locations for a dose of nostalgia and irony. Goths descended on Disneyland for an annual trip called “Bats Day in the Fun Park” for decades. Liana Aghajanian, a journalist in Detroit, wrote that she celebrated her birthdays at Chuck E. Cheese locations even in adulthood as a homage to happy childhood memories as a first-generation American.

Of the dozen American Girl Place locations, five feature full-service restaurants that serve items like cinnamon buns, macaroni and cheese, and smoothies, along with an extensive dessert menu. The original Chicago location, which opened in 1998, secured a full liquor license so it could host galas and benefits. New York is the only other location that serves liquor, but beer and wine are served at all of the cafes.

A representative for the company said that it doesn’t condone its dolls engaging in age-inappropriate behavior such as drinking alcohol, but the company welcomes American Girl fans of all ages.

Jamie Cygielman, the president of American Girl, wrote in a statement, “We know our devoted fans never forget the beloved American Girl characters and stories they grew up with, and we’re thrilled to have them reconnect and reminisce with us as adults.”

Even the cafe’s soundtrack, which mixes 1980s pop staples with campy original songs written about the American Girl characters, seems tuned to the whims of Gen Zers and millennials looking for immersive settings for their social media feeds.

American Girl Place retail stores in the United States sell a wide variety of toys and accessories centered on upscale dolls, whose prices start at around $100. Each doll has a back story that locates her in a specific era of American history.

The first dolls, released in 1986, were Molly, a bookish girl from the 1940s; Kirsten, a pioneer from Sweden; and Samantha, an orphan adopted into a posh New York family during the Edwardian era. Each doll stars in historical novellas, which are sold separately.

Some American Girl fans identify with one doll’s personality, referring to themselves as “an Addy” or “a Felicity.”

When a staff member overheard me bemoaning the fact that Molly never gets her due among American Girl fans, she brought me a Molly doll and clipped her chair to the rim of my table.

Since 1986, many more characters have been added to the American Girl roster, expanding the eras and ethnicities represented by the dolls. American Girl also sells custom dolls, and introduced Logan, its first American Boy, in 2017.

For some adults, the American Girl Place retail locations loomed large in their childhood psyches. Ms. Kerrigan, who appeared in a New York Daily News story about American Girl Place’s opening, has been a fan of the brand since she was 4.

“It’s literally my dream come true,” Ms. Kerrigan said, of returning to the store as an adult.

Her dining companion was similarly effusive. “It’s Disneyland for literary girls and gays,” said Mr. Hill in a Zoom interview.

The company has taken notice of Mr. Hill’s enthusiasm. At an event for the luggage company Stoney Clover Lane in October, Ms. Cygielman recognized Mr. Hill and introduced herself. The company also hosted him as its guest at the Manhattan cafe a few weeks ago.

On this occasion, the two influencers posed for selfies, recorded content and mugged for their phones as servers brought several courses that included cinnamon buns, crudités, buttered noodles and chicken fingers.

The vast cafe was mostly empty apart from five other parties, each made up of children and their chaperones. Mr. Hill and Ms. Kerrigan took their seats, got their dolls situated and toasted rose martinis served in glasses rimmed with pink sugar.

For some, 11:30 is early for a drink, but Mr. Hill had already spent the morning mixing water with cranberry juice to simulate cocktails for a sponsored Instagram post. This time the vodka was real.

Dessert was particularly well suited for Instagram, with a rainbow layer cake modeled from an American Girl toy set, a cup of chocolate mousse meant to look like a potted daisy, and heart-shaped sugar cookies with an accompanying D.I.Y. frosting kit, all served by a remarkably attentive and gracious staff.

The store comped their meal, as they sometimes do for influencers, but Ms. Kerrigan insisted on running her credit card so she could tip their server. As she and Mr. Hill began to pack up their dolls, a party of six adults and no children was seated nearby.

They were visiting from Austin, Texas, to celebrate Timothy Flitton’s 33rd birthday. They were inspired to have their birthday party at the American Girl Cafe after seeing Ms. Griffin’s TikTok video. Like Ms. Griffin, they ordered mimosas.

“They were too expensive when I was a child,” Ms. Howard, 32, said of the dolls. “And now we can afford it, should we want it.” She didn’t want it, but said she appreciated the gratis loaners they were each given for the meal.

A server emerged from the kitchen carrying a birthday cake shaped like a giant petit four. Mx. Flitton and the rest of the party erupted in applause.

The cheers died down as the waiter walked past the table. The cake was for someone seated behind them who was celebrating her ninth birthday.