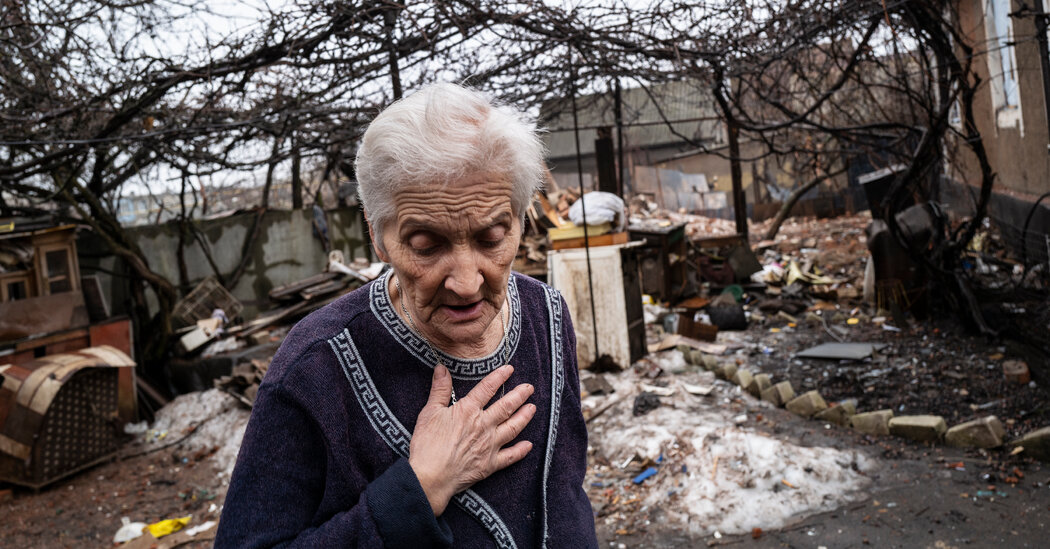 NOVOTOSHKIVSKE, Ukraine — Artillery shells struck a ring of frontline towns in eastern Ukraine Friday, blowing out windows, hitting schools, homes and military positions — and stirring fears that the escalation here is only the prelude to direct Russian military action.

“I have a small baby,” said Nadya Lapygina, a resident of Staryi Aidar, one of several dozen towns hit by artillery and mortar fire on Friday on the northern border of the breakaway separatist region. “You have no idea how scary it is to hide him from the shelling.”

They huddled under the stairs in their home and were unharmed through two volleys on Thursday morning and Friday afternoon, Ms. Lapygina said. The fighting between government soldiers and Russian-backed separatists in eastern Ukraine began Thursday and has not let up, with several dozen towns and villages on the government-controlled side being shelled, the authorities and aid groups said.

Ukrainian military officials and the minister of defense confirmed the pickup in shelling, saying Russian-backed separatists had fired 84 times with heavy weaponry on Thursday and Friday.

Eastern Ukraine, poor, remote and stuck in a grinding, eight-year-old war, is now looking increasingly like the flash point that could ignite a wider conflict. That fear was only reinforced by a video message from Russian separatists on Friday that warned without evidence of an impending Ukrainian military offensive and urged residents in the self-proclaimed Donetsk People’s Republic to evacuate to Russia.

The video was denounced by Kyiv as a baseless provocation.

Western governments have issued warnings on virtually a daily basis of the risks of a Russian invasion, after the Kremlin massed troops near Ukraine’s borders and demanded sweeping security concessions from NATO and the United States, which were largely rejected. Russian officials say they have no plans to invade but have not slowed the massing of what Western officials say are as many as 190,000 troops around Ukraine’s borders.

U.S. officials said they were keeping a close watch on the violence in eastern Ukraine, out of concern that Russia could use the escalation and the danger it poses to ethnic Russians and other civilians as a pretext to invade.

Russian officials present a starkly different view of the fighting in the east. Russia’s foreign minister, Sergey V. Lavrov, said on Friday that Moscow was concerned about “a sharp increase in shelling in eastern Ukraine,” which he blamed on the Ukrainian forces.

“The Kyiv regime has been violating its responsibilities for several years,” he said. “Every time we agree on new measures to help impose a cease-fire, Kyiv sabotages them.”

Out in eastern Ukraine, a cold rain fell on lingering patches of snow, and few people ventured out Friday on the streets in villages along the northern edge of the line of contact that separates the two sides.

Explosions rang out from time to time, as the combatants exchanged fire. “It makes you think maybe it’s time to run,” said Tatyana Neiman, a nurse and single mother in the village of Vrubivka, surveying the blown-out windows of her house after a shell landed nearby.

Fortunately, it hit while she was on a work shift and her 10-year-old son, Bogdan, was quarantining with Covid at a friend’s home. “I am on my own,” she said. “I am raising him on my own. And now he is afraid.”

A total of 12 houses in the village were damaged by shelling Friday morning, said Proliska, a local nongovernmental group affiliated with the United Nations High Commissioner for Refugees, which was providing aid to affected families throughout the day.

A few doors away, Valentina Melnichenko, 72, a retired warehouse clerk, was watching television Friday morning when a shell landed in her back yard, obliterating a small brick outbuilding. Her husband, who died a few years ago, had built it, she said. “Now, it’s destroyed,” she said, with tears in her eyes.

Impact craters, about a yard deep and encircled by sprays of black earth on the snow, pocked yards and the playground of a school.

Explosions had sheared branches from trees and shattered windows.

Olena Yaryna, the principal of the town’s school, said the shell hit the playground at about 10:30 a.m., breaking windows but doing little other damage. She and the teachers herded the children into the hallways, away from the windows, and had them lie flat on the floor.

“That’s how we lived through it,” Ms. Yarnya said. “I absolutely don’t understand why they shelled us.” She added, “The children got very scared and the parents even more.”

Fighting in eastern Ukraine is not unusual, with periodic flare-ups throughout the war years. Yet, local people say the recent increase is the most severe in two years, since a tentative and oft-violated cease-fire took effect.

Understand How the Ukraine Crisis Developed

Failed diplomatic efforts. The United States, NATO and Russia have been engaged in a whirlwind of diplomacy to prevent an escalation of the conflict. In December, Russia put forth a set of demands, including a guarantee that Ukraine would never join NATO. The West dismissed those demands and threatened economic consequences.

And it comes amid an escalation that has seen Russia announce major military exercises this weekend that will feature the launch of ballistic and cruise missiles, as well as a test of its strategic nuclear forces — the land-based launchers, bombers and warships used to deliver nuclear weapons — and naval exercises on the Black Sea.

The Defense Ministry said the drills were planned in advance, and the Kremlin spokesman, Dmitri S. Peskov, denied that they were intended to raise tensions.

But they are coming at a critical juncture in the standoff over Ukraine.

“People are scared,” said Vera Voitenko, 62, a Red Cross volunteer in the village of Novotoshkivske, about a mile from the frontline. She said people would leave if they could, “but who is waiting for us, and where?”

The deputy principal of the school in this village, Natalia Dotsenko, said she was woken by an artillery barrage early Thursday morning. Though occasional explosions are commonplace near the front, she said the sustained firing was different, adding: “We understand something dangerous is coming.”

Older children are instructed to grab first graders and kindergartners under the armpits and carry them into the basement. In artillery drills and several instances of actual, incoming artillery, the students performed well, Ms. Dotsenko said.

Her face was pinched with worry as she described the drill, and she nervously clenched her hands. “You cannot explain fear with words,” she said.

Out on the streets, muddy rivulets flowed between potholes. Many of the two- and three-story brick buildings bore the scars of earlier artillery strikes.

Friday morning, as artillery fire echoed through the town, Sofia Sakhibgarayeva, 55, a house cleaner wearing a red hat, leopard print coat and purple mittens, walked up the middle of the deserted street, saying she was going grocery shopping.

“It’s hard on the nerves,” she admitted, but said she didn’t want to succumb to worry. “Look at my mittens,” she said. “Don’t you think they are pretty?”