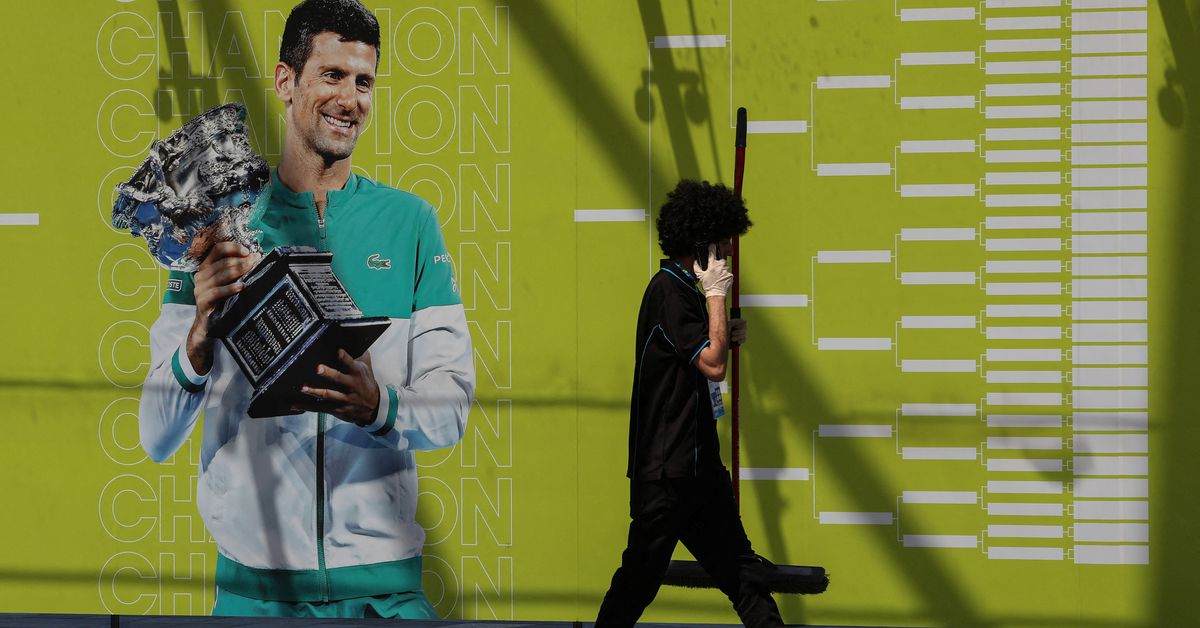 A cleaning staff member walks past an image of Serbian tennis player Novak Djokovic as questions remain over the legal battle regarding his visa to play in the Australian Open, at Melbourne Park in Melbourne, Australia, January 12, 2022. REUTERS/Loren Elliott

Seven West Media Ltd (SWM.AX) news reader Rebecca Maddern could be heard discussing the issues in an off-air conversation with co-anchor, Mike Amor, according to footage circulated on social media.

Maddern could be heard describing the Grand Slam champion as sneaky and lying on the expletive-filled video which was apparently recorded without Maddern’s knowledge, known as a “hot mic”.

“But I think he is going to get away with it,” he said.

The world number one, chasing his 21st Grand Slam title at next week’s Australian Open, had his visit to the country sensationally disrupted by a four-night stint in immigration detention after border control guards deemed his medical exemption for being unvaccinated against COVID-19 as invalid.

He had his visa reinstated after a legal challenge, allowing him to stay in the country.

However, medical and travel documents filed in court led to questions about Djokovic’s movements before coming to Australia with social media posts appearing to show him in Belgrade less than two weeks before he headed to Spain and then on to Australia.

Accounts from two eyewitnesses and another individual, obtained by Reuters, corroborated those social media posts.

On Wednesday, Djokovic addressed what he described as “continuing misinformation about my activities” in a long Instagram post.

He said his agent made a “human error” when filling out his travel declaration stating he had not visited any other countries and denied knowingly going out in public after learning of his positive test, other than one photo shoot where he mostly wore a mask.

“I want to emphasise that I have tried very hard to ensure the safety of everyone and my compliance with testing obligations,” Djokovic said. read more

Seven defended the presenters, saying the conversation was private and the video broke state laws which make it an offence to record a person without their permission. It is investigating who was responsible for leaking the video.