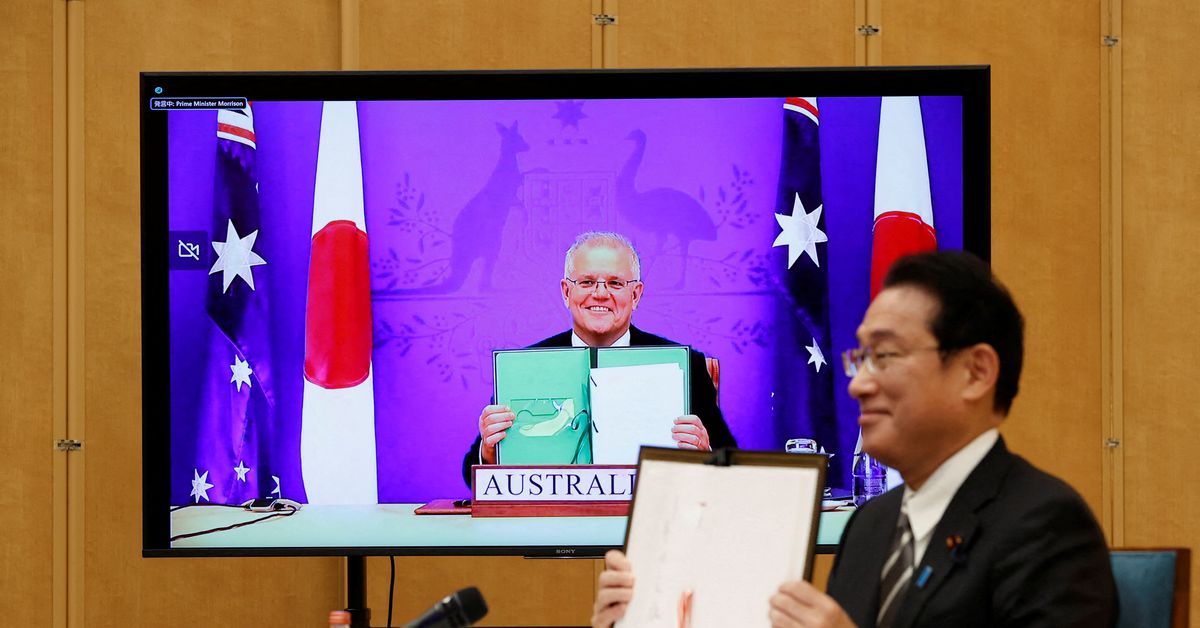 MELBOURNE, Jan 6 (Reuters) – Japan and Australia hailed on Thursday a new agreement to cooperate closely on defence as a breakthrough and a landmark, in the latest step to bolster security ties against the backdrop of rising Chinese military and economic might.

Japanese Prime Minister Fumio Kishida and Australian Prime Minister Scott Morrison held a virtual summit to seal a pact that has been in the works for several years.

Australia has been working with Japan, India, the United States and Britain to strengthen defence ties amid concerns about China, including its pressure on Taiwan, freedom of navigation in the region and trade disputes.

The Reciprocal Access Agreement (RAA), Japan’s first with any country, will allow the Australian and Japanese militaries to work seamlessly with each other on defence and humanitarian operations, Morrison said.

“Japan is our closest partner in Asia as demonstrated by our special strategic partnership, Australia’s only such partnership – an equal partnership of shared trust between two great democracies committed to the rule of law, human rights, free trade and a free and open Indo-Pacific,” Morrison said at a signing ceremony.

“The RAA is a landmark treaty which opens a new chapter for advanced defence and security co-operation of what is a complex and rapidly changing world, something you and I both understand very well,” Morrison told the Japanese leader.

Kishida called the agreement a “breakthrough” and said ties with Australia would remain a model for security cooperation with other countries, a Japanese foreign ministry official told a media briefing.

Kishida and Morrison agreed that the two sides would work to update a 2007 Japan-Australia Joint Declaration on Security Cooperation as soon as possible to set a clear direction for their ties, the official said.

The summit comes as tension over Chinese-claimed Taiwan has been rising as President Xi Jinping seeks to assert China’s sovereignty claims over the democratically ruled island.

Kishida and Morrison underscored the importance of peace and stability across the Taiwan Strait and encouraged the peaceful resolution of issues, according to a joint statement issued after the summit.

Before the meeting, Morrison said stronger ties with Japan were needed “to deal with a new and even more challenging environment, particularly within the Indo-Pacific”.

Japan has a status of forces agreement with the United States, which allows the United States to base warships, fighter jets and thousands of troops in and around Japan as part of an alliance that Washington describes as the bedrock of regional security.

Kishida had been due to travel to Australia on Thursday but scrapped the trip to tackle a surge in COVID-19 cases in Japan.