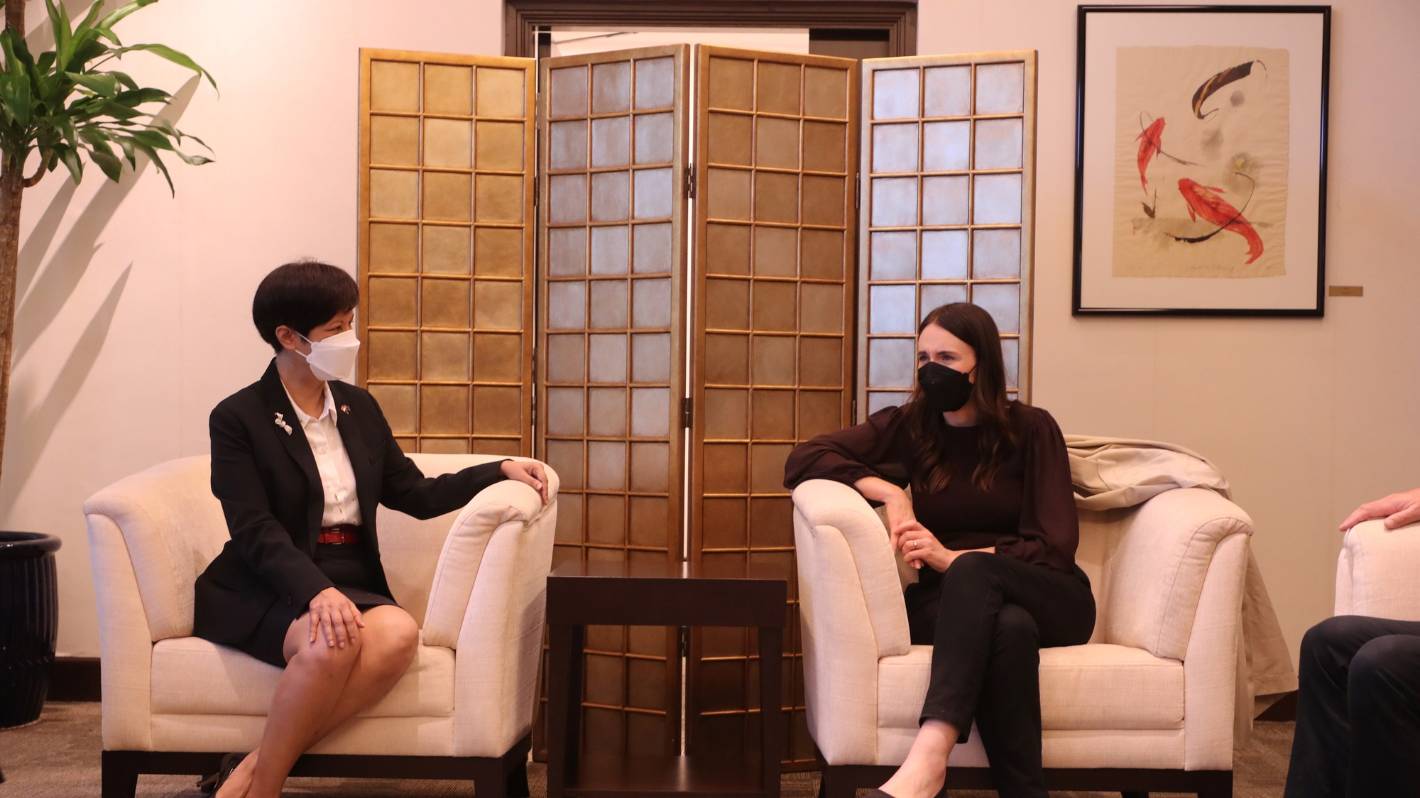 Prime Minister Jacinda Ardern has landed in Singapore eager to tell the country that New Zealand is back open.

Ardern flew to Singapore via Cairns in Australia on an Air Force Boeing traditionally used by prime ministers in her first international travel since the pandemic first hit New Zealand in February 2020.

She was greeted by Singapore’s Minister in the Prime Minister’s office, Indranee Rajah.

Ardern will spend Tuesday and much of Wednesday in Singapore before flying to Japan, where she will stay until Sunday.

She is travelling with a delegation of business leaders and is aiming to promote New Zealand tourism and trade interests to the two high-income Asian countries.

She will meet with the prime ministers of Singapore and Japan.

Standing atop a luggage conveyer at Whenuapai Air Base in Auckland, she told the delegates that reconnecting with the wider world was “critically important” to New Zealand.

“To be out there again after an age is very significant,” Ardern said.

She has faced some criticism for not travelling to the wider world earlier, as some other world leaders did.

Ardern told media that she would have been happy to venture out earlier in the pandemic and undergo two weeks of managed isolation on her return home, but no potential trips had enough “bang for buck” for that to make sense.

Auckland Airport chief executive Carrie Hurihanganui, who is part of the business delegation, said it was key that New Zealand communicated to the world that it was back open.

“Success is sharing to the world that we are open. We are open for business and we would love to welcome you back,” Hurihanganui said.

She said tourists were already returning as the country opened to Australia, but levels were nowhere near where they had been prior.

“Last Wednesday when we opened to Australia we had 3000 customers through. That’s up from 500 customers a day before. Pre-pandemic that was more like 30,000.”

Both Singapore and Japan are visa-waiver countries, meaning New Zealand will welcome their citizens as tourists from early May with no isolation requirement.

Hurihanganui said she would love to see airlines increase their frequency of flights to New Zealand, but some were still waiting to see how much demand there was.

Currently, there is just one flight between Tokyo and Auckland a week, but Hurihanganui expected that could return to three or four in the not too distant future.

Chief executives of Fonterra and ANZCO Foods, and the chief people officer from Zespri are also on the trip.

Japan is an exceptionally profitable export market for Zespri and Fonterra, despite the lack of a bilateral free trade agreement between Japan and New Zealand.