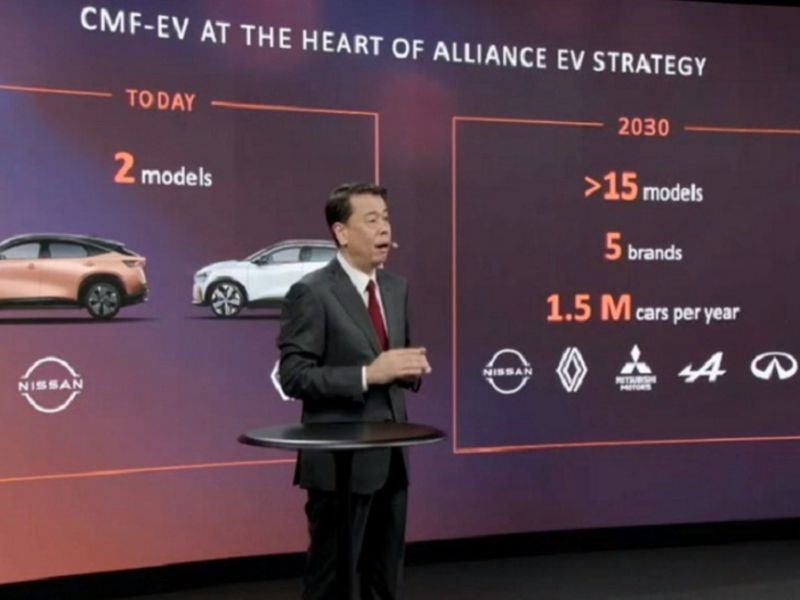 Nissan CEO Makoto Uchida said that in 2030, the alliance will be building 1.5 million vehicles a year based on that platform alone. It will underpin 15 models across five brands, including Nissan, Renault, Mitsubishi and the premium marques Infiniti and Alpine.

The CMF-EV will support nearly half of the 35 new EV models on the way.

Other shared platforms will include a CMF-AEV for affordable entries, such as the Dacia Spring, the LCV-EV for commercial vehicles such as the Nissan Town Star, and the CMF-BEV for subcompact EVs. Renault will take the lead in engineering this compact architecture.

Nissan said it would introduce a small EV for Europe based on the CMF-BEV platform as a successor to its Micra. It will be made by Renault at the company’s ElectriCity complex in northern France.

The CMF-BEV platform will achieve a 400-kilometer (250-mile) range and enable a 33 percent reduction in cost and 10 percent reduction in power consumption, the companies said. The alliance envisions CMF-BEV supporting some 250,000 vehicles a year after its 2024 launch.

Renault has said it will become an electric-only brand in Europe by 2030, joining Ford of Europe, Stellantis brands and others in dropping combustion engines pledge as the European Union pushes to halt internal combustion sales by 2035.

The three companies will also focus on solid-state batteries and electronics.

The companies said that by developing shared platforms and electronics, they will be able to have more than 10 million vehicles on the road across 45 Alliance models equipped with autonomous driving systems by 2026. By the year, the Alliance said it will also be the first global mass-market manufacturer to introduce the Google ecosystem in its cars.

The latest announcement puts a forward-looking spin on the alliance’s burgeoning recovery.

The November 2018 takedown of Ghosn threw the alliance into disarray amid plunging sales, deep losses, mutual distrust and jousting over the structure of the auto group.

Only in 2020 did the alliance return to some semblance of business as usual, under completely new leadership. At that time, the three companies carved up the world into spheres of influence, handing Renault the lead in Europe, Nissan the lead in the U.S., China, Japan and Mitsubishi the point position in Southeast Asia. Since then, however, the Alliance has been mostly quiet.

In the interim, all three automakers have been more focused on fixing their own businesses than developing joint projects. Soon after Ghosn’s departure, each of the companies was battling falling sales and waves of red ink, as investors rushed to ditch shares in them.

After notching its biggest-ever loss, Nissan expects to rebound to profitability in the current fiscal year ending March 31. Mitsubishi also forecasts being back in the black. Renault, after its own cost-cutting program that includes plans to move out of its global headquarters building, swung to a small profit in the first half of this year and aims to stay above water for all of 2021.

The alliance is held together in a cross-shareholding relationship, with Renault owning 43.4 percent of Nissan, which in turn has a 15 percent non-voting stake Renault. Nissan has a third of Mitsubishi Motors’ stock.

A new structure has been expected by financial markets. Renault has been in the dominant position since it bailed out Nissan two decades ago  but is now smaller by sales than its Japanese partner.

Reuters contributed to this report