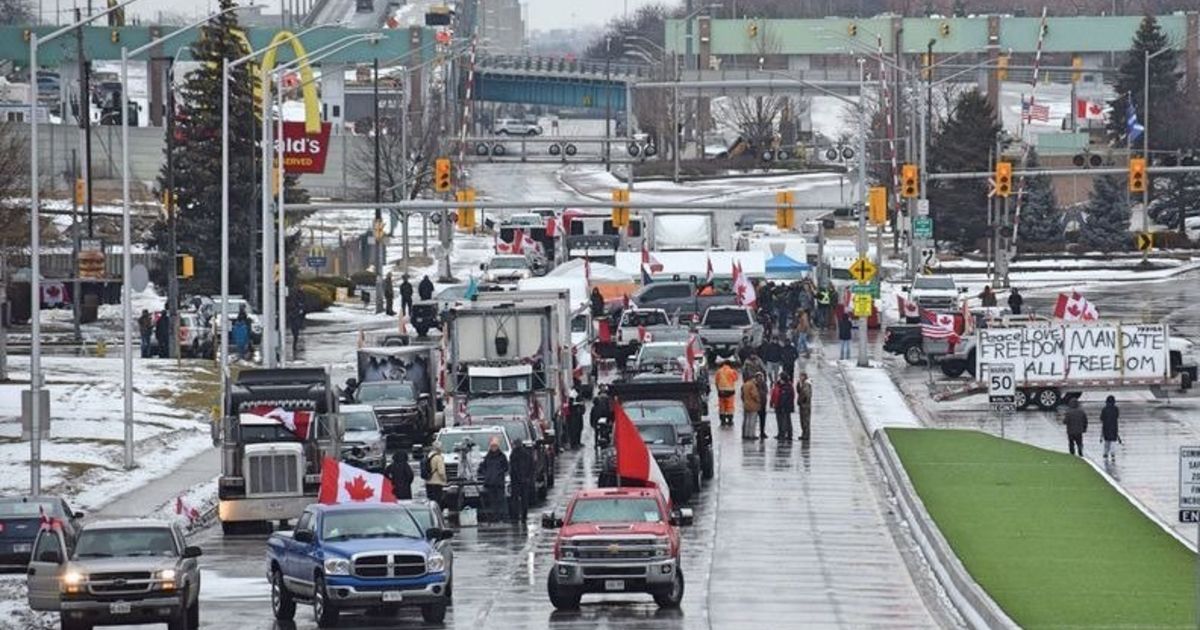 DETROIT — The shutdown of the Ambassador Bridge last week forced by protests in Canada has cost the automotive industry millions of dollars and left many wondering who pays for the latest supply chain crisis.

Direct industry losses amount to $300 million, including a $155 million hit to automakers and $145 million in lost direct wages due to plant shutdowns, according to an estimate released Monday by consulting firm Anderson Economic Group LLC.

The bridge between Detroit and Windsor — a vital link for the two countries’ economies — reopened Sunday after a six-day shutdown, but the impact could linger for months, experts say, as does the threat of future closures. Canada’s Prime Minister Justin Trudeau invoked emergency powers Monday to quell the paralyzing protests by truckers and others angry over Canada’s COVID-19 restrictions and other issues.

Complete coverage of the bridge blockade

“Within hours of the trade disruption at the Ambassador and Blue Water bridges, we observed shortages and then slowdowns at assembly plants,” Patrick Anderson, CEO of Anderson Economic Group, said in a news release. “Only some of that lost production can be made up given the tightness of the auto industry’s supply chain right now, so these are real losses to the men and women working in this industry.”

The bridge closure is yet another force majeure in a period of unprecedented disruption, according to legal experts. Force majeure — an unforeseeable circumstance preventing a contract from being filled — is the likely defense for suppliers that were unable to move parts across the bridge, said Dan Rustmann, co-chair of Detroit-based law firm Butzel Long’s global automotive group.

“It’s just really another disruption in a string of disruptions for the industry,” Rustmann said. “Seems to be one thing after another hitting the supply chain.”

Contract disputes between automakers and suppliers have become common since the COVID-19 pandemic and resulting microchip shortage have hampered production over the past couple of years.

In the case of the Ambassador Bridge closure, which blocked truck traffic, some suppliers resorted to flying parts back and forth. Air freight can cost 10 times more than moving parts on trucks, Rustmann said. While keeping assembly lines running amid crisis is the priority, OEMs and suppliers will eventually have to decide how the bill gets handled.

One benefit of dealing with so many recent supply chain kinks is that companies have a better idea how to handle the unexpected, said Michael Brady, co-chair of the automotive industry group at Warner Norcross + Judd.

“It’s a different cause, but the same type of interruption in the supply chain,” Brady said. “Whether it’s the bridge getting shut down or the ports being jammed, it all results in parts not getting to customers in time. I think if this would have happened pre-COVID, you would have seen a much worse reaction from everybody in the supply chain. Everybody knows how to deal with these things better.”

Rustmann and Brady said that who bears responsibility for the costs depends on supplier-customer relationships and contract terms. The attorneys said they have been advising clients to take a wait-and-see approach but also to make sure they understand their contractual rights. Some customers are more willing to absorb costs, while others take a hard-line approach.

As with business in general, relationships are crucial to the supply chain, said Dave Andrea, principal at Plante Moran. A contract might allow a customer to nickel-and-dime suppliers, but that might not be a wise move in the long run.

“You do want to build up that bank of goodwill in times like this,” Andrea said. “Purchasing tends to be more transactional — getting the right part to the right place at the right time. But it’s really when you don’t have the playbook, and when you’re really trying to do crisis management, that’s when you want to have friends to call.”

Choosing to not build a support network around the supply base may backfire on a buyer next time there is a supply chain crisis, Andrea said.