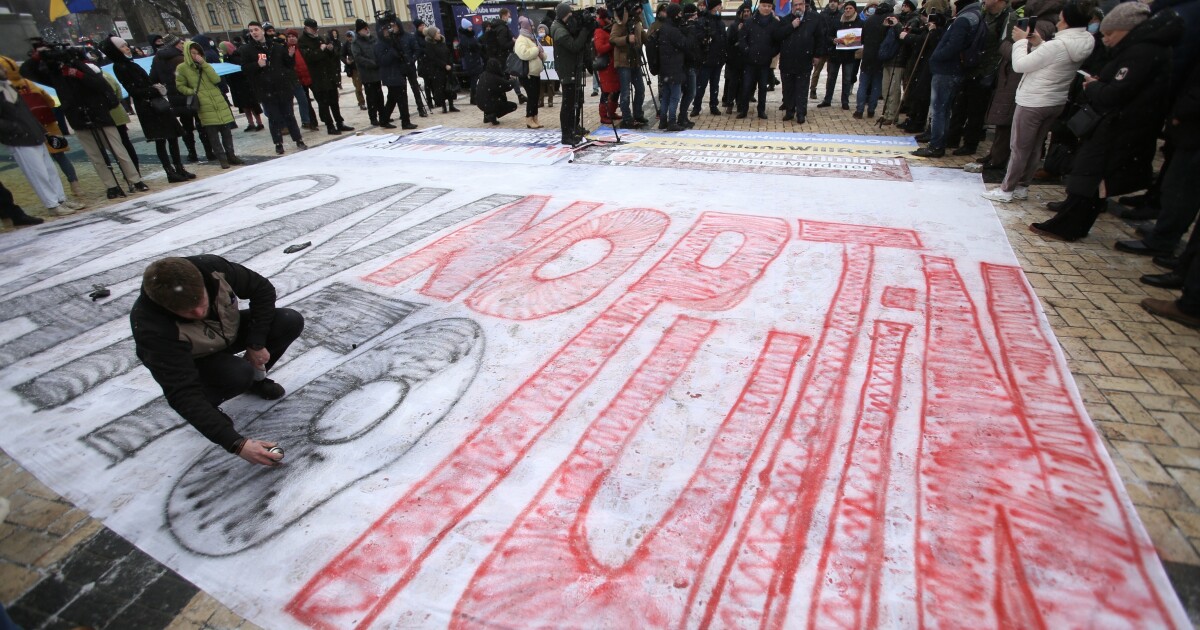 On the picturesque streets of a snow-dusted capital, many ordinary Ukrainians are of two minds: They see ominous war clouds on the horizon, but hope the threat might yet prove a passing squall.

For weeks, about 100,000 Russian troops, backed by armor and artillery, have been massed just outside Ukraine, hemming it in on three sides. Moscow says it doesn’t want war, but the Kremlin offers up a near-daily recital of possible pretexts for conflict.

The time between Orthodox Christmas on Jan. 7 and the Old New Year, still informally celebrated on Jan. 14, is traditionally a festive interlude. This year, the week was marked by a flurry of Ukraine-centered diplomacy in European capitals.

There were high-level U.S.-Russia talks in Geneva on Monday, NATO meetings on Wednesday with a Russian delegation in Brussels, and consultations Thursday in Vienna by the Organization for Security and Cooperation in Europe, in which both Russia and Ukraine are participating states.

No breakthroughs were reported, and Russia’s deputy foreign minister, Sergei Ryabkov, offered a downbeat assessment of the week’s diplomatic efforts. On Russian state television, he said Thursday that he did “not see any reason to sit down again” for more talks in coming days.

Watching it all unfold, ordinary Ukrainians express a mix of fatalism and wariness, defiance and disbelief. Many describe being caught off guard by Russian President Vladimir Putin’s 2014 annexation of Ukraine’s Crimean peninsula, and the eruption of a bloody separatist conflict in the country’s east.

“I don’t believe a full-scale war is possible,” said Diana Kolodyazhnaya, 29, a videographer who lives in the Ukrainian capital, Kyiv. But she ruefully acknowledges having the same skepticism eight years ago when she was living in the eastern city of Slavyansk, which was captured for a time by pro-Russia insurgents.

Many Ukrainians describe a kind of split-screen existence, in which their daily routines are undisturbed, but they obsess over events they track in news reports and on social media.

“I’m thrown from one extreme to the other — when I read our news or Telegram [app] channels, it all looks very serious,” said Alexei Lyapin, a 26-year-old information technology worker who lives in the western city of Lviv. “And on the other hand, sometimes I just don’t read news, and just live a normal life.”

Many people acknowledge a central contradiction: They altogether ignore some aspects of a prospective conflict, while worrying constantly about others.

“I don’t know where the bomb shelters are,” said Natalia Serebryakova, 43, a film critic who lives in the northeastern city of Sumy. She said she had not perused government instructions on where to take shelter in the event of fighting, or what to pack in an emergency “grab bag.”

But Serebryakova thinks a lot about her 18-year-old son, who would be eligible for military conscription even though he is a university student.

Decoding Putin’s intentions is never easy, and Ukrainians are more aware than most of the Russian leader’s propensity for surprises.

“No one knows what’s in Putin’s head,” said Lyapin, the IT worker from Lviv.

But people took careful note when Putin suggested in an essay last year that Ukraine and Russia are the same country, a Slavic brotherhood and sisterhood. To many, that sounded in line with Putin’s ambitions of continuing a sphere of Russian influence in onetime Soviet republics — even though Ukraine has been independent for three decades.

“We know that these are imperial ambitions of Russia,” said Anastasia Vinslavska, 34, who trained as a psychologist. “It’s exactly because of Russia’s desire to collect the lands of the former U.S.S.R.”

As tensions grow, many Ukrainians share a painful experience: ruptures with friends or relatives outside the country who have embraced nationalist narratives churned out by Russian media outlets, portraying Ukraine, in florid terms, as the true aggressor.

Kolodyazhnaya, the videographer from Kyiv, said she had many relatives in Russia, including her mother, stepfather, aunt and uncle. But — in a scenario that might sound familiar to many Americans — politics are simply off-limits for discussion.

“In the beginning, my mother and I tried to talk about it,” she said. “But it is very difficult to agree on something when you live in completely different media spaces.”

Serebryakova, the film critic, has stayed in touch with friends in Russia who are not Putin supporters, but on Facebook, she unfriended those who “turned over to the side of the Russian government.”

Geography looms large for many Ukrainians when it comes to assessing their personal level of risk.

“We’ve made a stash of food and goods, just in case,” said Igor Kalinichenko, 28. He lives in the eastern city of Kramatorsk, which was captured by Russia-backed separatists in 2014 before government forces regained control, and the present-day front lines between government troops and insurgents are only 30 miles away.

“If it’s going to be ‘hot,’ we’ll leave and take our relatives with us,” said Kalinichenko, who works in tech support. But he said he knew many people with property and businesses that they would be reluctant to leave behind even if hostilities broke out.

And in the event of a full-scale invasion, havens might be hard to come by.

“Where to go is a good question, which I can’t answer right now,” he said. “I don’t want to think about it.”

Even in parts of the country deemed relatively secure, people are preparing for the worst. Lyapin feels fairly safe in Lviv, which is fewer than 50 miles from the Polish border, but he has relatives in Ukraine’s east and in Kyiv.

“I can’t just leave,” he said. “It would be very hard for me to move to Poland, for example, and support my family from a distance. All I can do is change my money to dollars and keep them in case everything goes bad.”

Ukraine’s army is dwarfed by the Russian armed forces, and it’s widely acknowledged that if Putin decided to brush aside ever-sterner Western warnings and reinvade, it would be almost impossible for Ukraine to stave off an initial advance.

But a lot of Ukrainians are also confident that both regular and irregular defenders could inflict some punishment of their own.

“We are no longer helpless,” Kolodyazhnaya said. She pointed out the immense logistical complexities of any Russian occupation, including staving off attacks by partisans, holding captured territory and building reliable supply chains.

Vinslavska, the psychologist, served as a volunteer paramedic in 2017 in eastern Ukraine, and has since undergone nurse’s training. She has a paramedic’s backpack stocked with bandages and medications, but lately has been working out what else she should have on hand.

“If something happens, I’ll add money, documents, underwear, a makeup kit and a phone charger,” she said. “And I’ll be ready to go to war.”